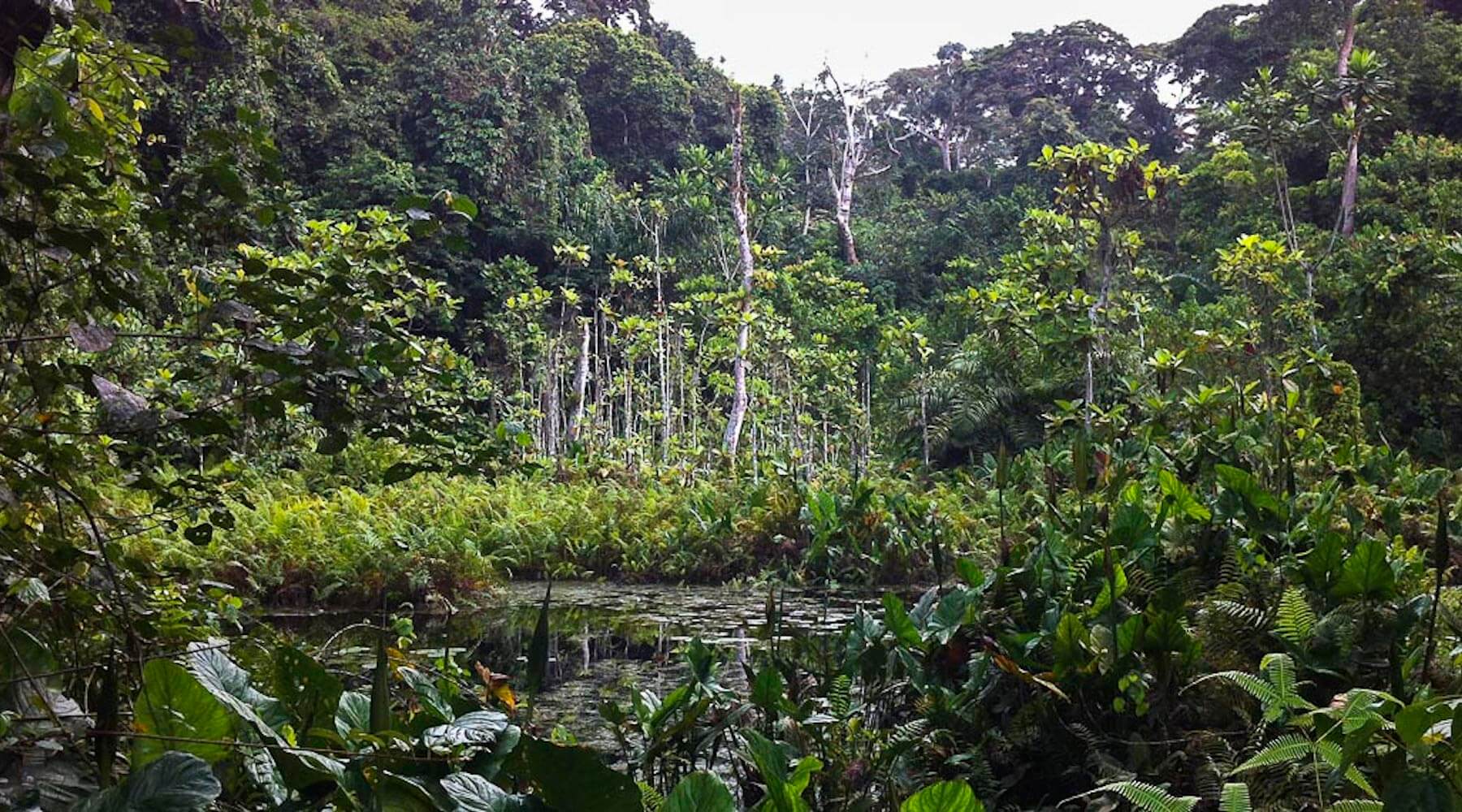 Upon his return from a visit to China in June 2017, Vice President Mahamudu Bawumia announced, with much fanfare, that Ghana was entering into a deal with the Chinese Development Bank. The terms of the deal are straight-forward: China will construct roads, bridges, social housing, and other infrastructure projects worth $10 billion in Ghana, and in exchange, China will gain access to $10 billion worth of Ghana’s bauxite.

China is now Africa’s fourth largest investor, having pumped $40 billion into the continent’s economies in 2016.

Unlike gold, bauxite is not a well-known resource, yet the sedimentary rock plays a crucial role in the global economy as one of the chief components of aluminum. According to the government, Ghana’s total untapped bauxite reserves are worth $460 billion.

For many developing economies, China has become an increasingly reliable bilateral partner, especially in infrastructure financing. In a number of African countries, it is among the largest foreign investors, often times rivaling former Western colonial powers. In fact, China is now Africa’s fourth largest investor, having pumped $40 billion into the continent’s economies in 2016. Despite the fact that U.S. investments abroad continue to outpace those of China, President Donald Trump’s America-first policy and his blatantly racist posturing has not endeared him to African leaders.

As such, the marriage between a resource-rich country like Ghana — which seeks to address its massive infrastructural shortfalls — and China’s resource-hungry factories appears to be a match made in paradise.

The deal with Ghana is part of a string of similar “resource-for-roads” agreements China has struck with other nations. In Guinea, another bauxite-rich West African nation, China has committed to infrastructure projects worth $20 billion in return for bauxite of the same value. 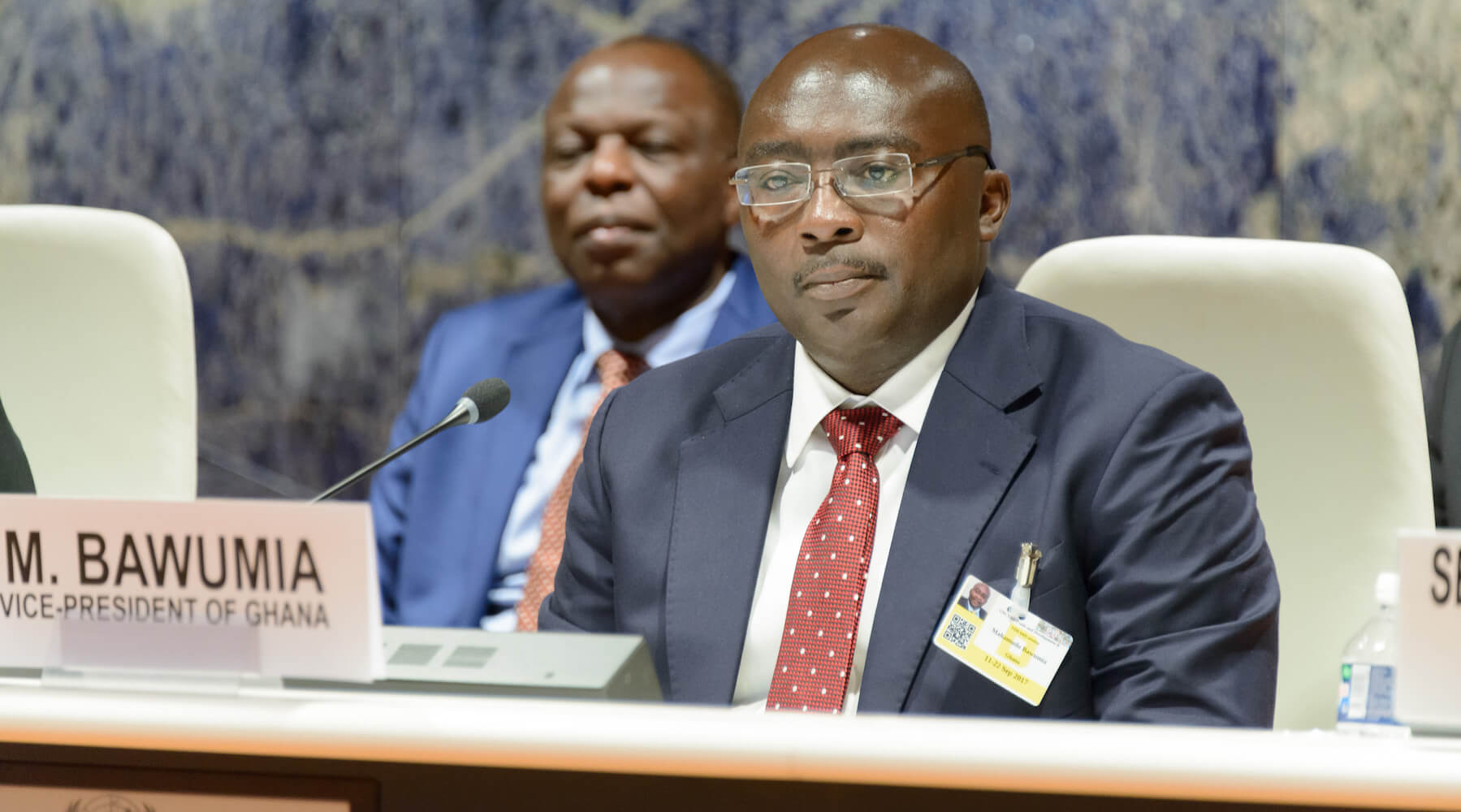 The agreement Vice President Mahamudu Bawumia announced in 2017 sounded ideal: In exchange for $10 billion worth of bauxite, China would provide Ghana with financial support for infrastructure projects worth the same amount. Photo: UNCTAD.

Building A Nation Beyond Aid

There is a simple message on a billboard just across the Jubilee House lawn. The billboard is strategically placed to catch everyone’s eye, but the message is meant for one man in particular, the main resident of the house, which happens to be the official residence and office of Ghana’s President.

Since assuming office in January 2017, President Nana Akufo-Addo announced his vision of building a “Ghana Beyond Aid.”

During his 2016 campaign, President Nana Akufo-Addo made many ambitious infrastructure promises of new roads, bridges, dams, and fishing harbours. Since assuming office in January 2017, he announced his vision of building a “Ghana Beyond Aid.” To fulfill this vision, he has set his eyes on revenue accrued from the mining of bauxite.

In a speech that marked Ghana’s 61st Independence Day celebrations in March 2018, he said: “My government is going to implement an alternative financing module to leverage our bauxite reserves in particular to finance major infrastructure programme across Ghana. This will probably be the largest infrastructure programme in Ghana’s history without any addition to Ghana’s debt stock. It will involve the barter or exchange of refined bauxite for infrastructure.”

Among the places marked for mining is the Atewa Range Forest Reserve.

This has caused a massive collision between the government, local environmentalists, and citizens of the communities surrounding the reserve. The billboard outside of the President’s house reads:

Don’t mine bauxite in the Atewa Forest!

Although the government has stated that it will engage in “responsible mining” in the forest, officials have yet to provide any proposals addressing a framework for how to successfully mine without inciting harmful environmental effects. 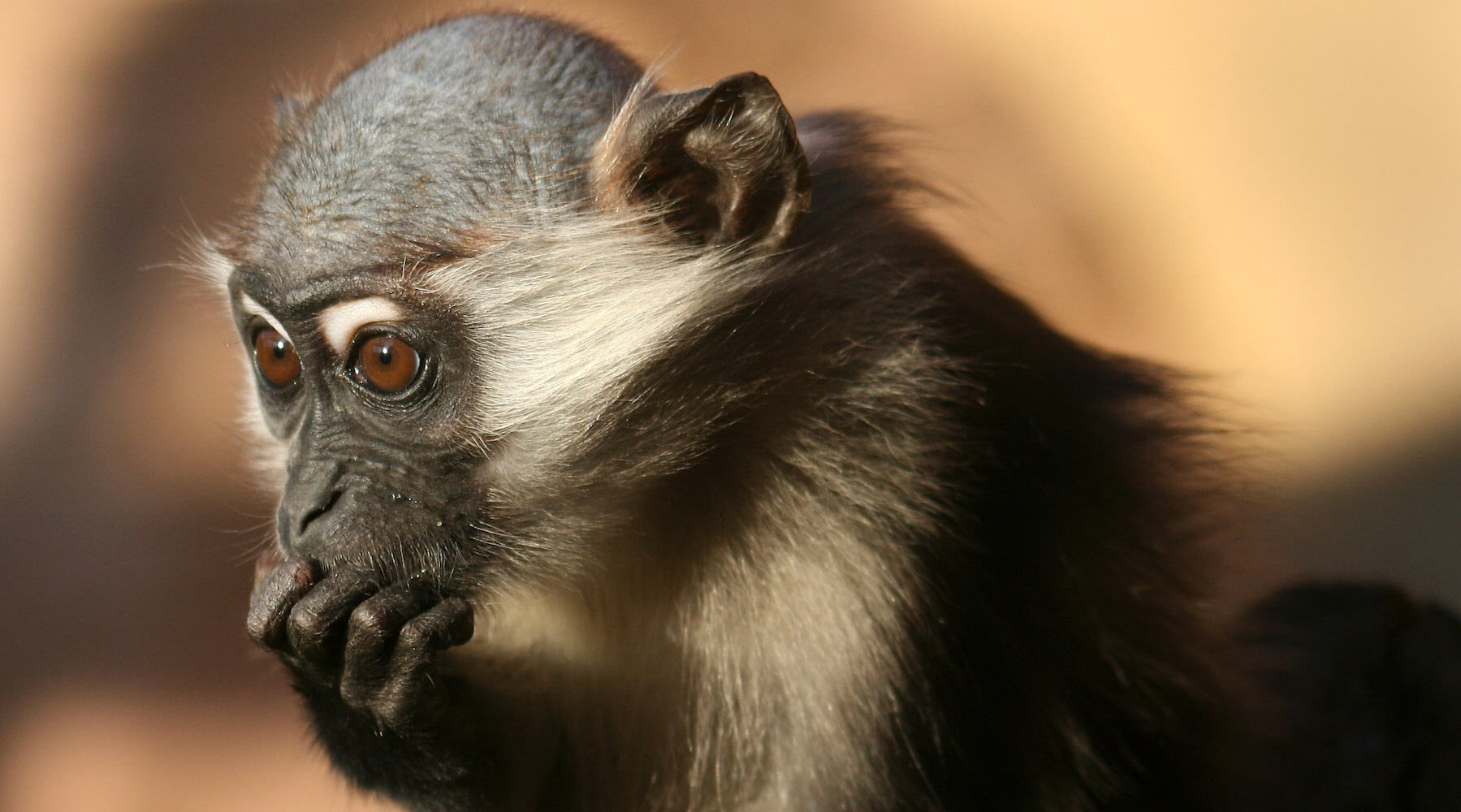 The Mangabey monkey is one of the many species that will lose their only viable habitat if the Atewa Forest is destroyed for mining. Photo: Keven Law.

A Forest in Crisis

When scientists from Conservation International explored Ghana’s Atewa Range Forest Reserve in 2006, they found an array of plants and wildlife that were under threat globally but thriving in the reserve. One of these species was the Togo Slippery Frog, which is classified as “critically endangered” on the IUCN Red List of Threatened Species. Scientists say the reserve is probably the last viable place this frog exists.

According to the Forestry Commission, Ghana lost 80 percent of its state-managed forests between 1990 and 2016 due to illegal activities.

More than 700 butterfly species — twice as many as contained in the whole of Europe — are believed to live within the 23,663 hectare reserve, and new discoveries, such as the existence of the endangered white-naped Mangabey monkey, continue to be made every year. Located in Ghana’s Eastern Region, the reserve has rightfully been declared a Globally Significant Biodiversity Area.

According to the Forestry Commission, Ghana lost 80 percent of its state-managed forests between 1990 and 2016 due to illegal activities. The Atewa Reserve, with its vast array of ecological treasures, remains one of the least disturbed tropical forests in the small West African country.

However, with the announcement of the bauxite mining and infrastructure deal, environmental campaigners are in a race against the Ghanaian government — and time — to keep the forest and its inhabitants intact.

Joyce Okyerewah believes there are innumerable reasons why the forest should not be mined. Okyerewah, 50, is a member of the local interfaith group which is a prominent stakeholder in the Concerned Citizens of Atewa Landscape movement, a broad alliance of national environmentalists, cocoa farmers, and youth groups drawn from the communities near the reserve.

For her, the reserve is a critical national resource for scientific research, as well as a treasured space in which she hopes her grandchildren will be able to enjoy a broad diversity of plants and animals.

The announcement of the mining deal caught local environmental activists off guard. For a long time, they had campaigned to have the Atewa Forest Reserve upgraded to a national park in order to increase its current protective measures.

For a long time, they had campaigned to have the Atewa Forest Reserve upgraded to a national park in order to increase its current protective measures.

This campaigning was especially significant after the reserve had been encroached upon in recent years by illegal, small-scale gold miners and lumber operators. Farms were destroyed to prospect for gold, and many rivers turned brown and were polluted with the mercury used to wash potentially gold-rich soils. In mining communities, where poverty is rife and opportunities for a better life are but a distant dream, many children simply abandon their education to mine instead. As the home economics teacher in one of the local junior high schools, Okyerewah has witnessed this first hand.

Following an intense anti-pollution campaign run by a media coalition formed by newspapers, radio, and tv stations, small-scale mining was banned across the country in March 2017 and President Akufo-Addo set up a police-military task force to enforce the ban. Environmental activists had cause to believe they had found an ally in the Jubilee House, and hoped the President, who is a UN SDGs ambassador and who hails from a town near Atewa, would join in the fight for national park status.

It was not so. 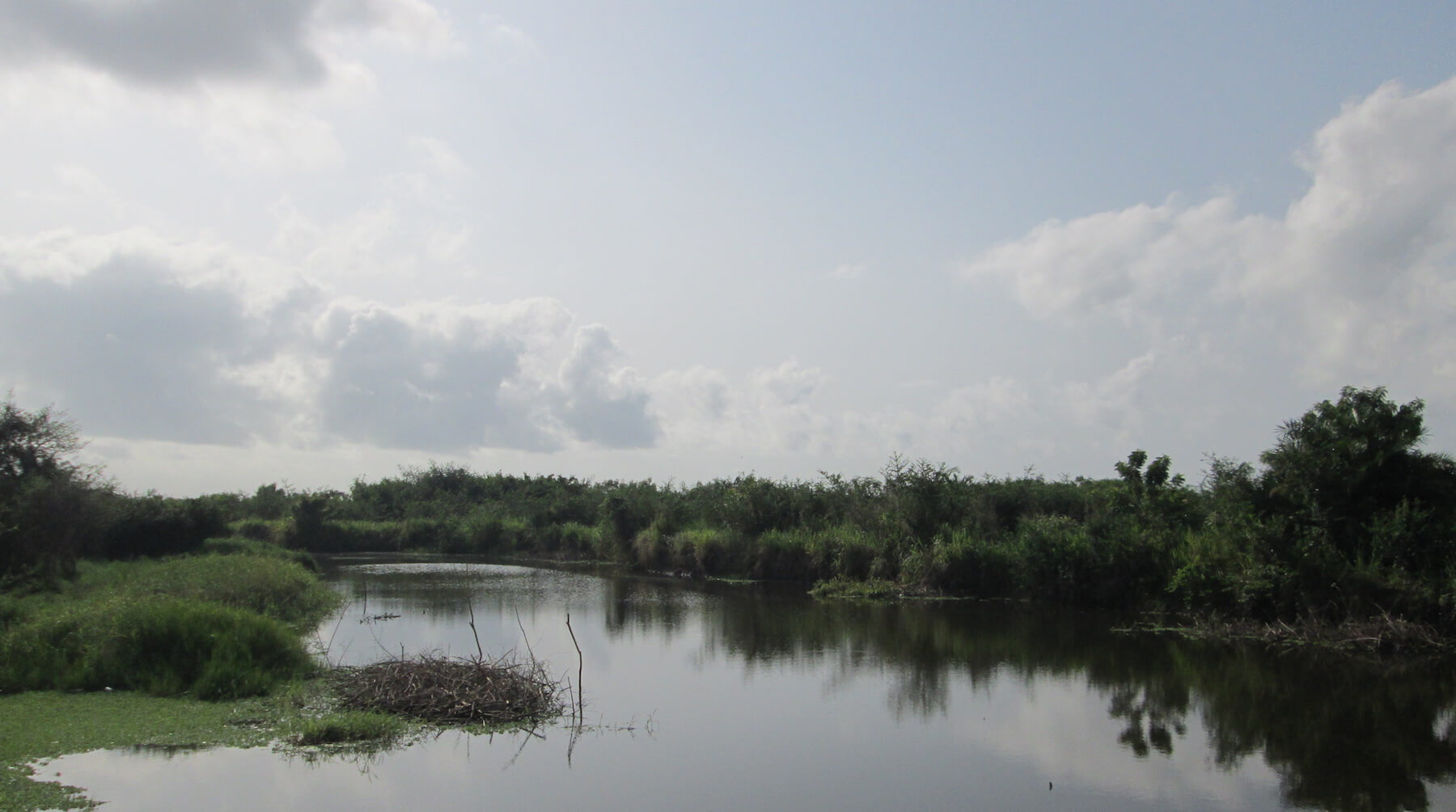 The Densu is one of three rivers that serve five million Ghanaians, and it is at major risk of pollution from the potential mining projects. Photo: Skiet3n469.

Environmental groups are bent on resisting

For Okyerewah, aside from the threat to endangered flora and fauna, the biggest risk of mining in the reserve is posed to the three major rivers that take their sources from the hills. The Densu, Ayensu, and Birim rivers are treated to serve about five million Ghanaians, which means contamination as a result of mining would have catastrophic consequences. She also argues that the bauxite in Atewa Forest is “low grade” and commercially unviable, and that mining it would therefore mean risking countless Ghanaian resources for little benefit.

Campaigners embarked on a 95 kilometer protest walk from the reserve to Ghana’s capital, Accra, in March 2018.

To draw attention to the cause, campaigners embarked on a 95 kilometer protest walk from the reserve to Ghana’s capital, Accra, in March 2018. For six days they carried water from the reserve’s three rivers on their heads, spreading their message to communities along the way. The walk culminated in a petition to the president, calling on him to rescind the bauxite deal. In July 2018, the activists held a press conference inside the forest to demand its exclusion from mining.

Campaigners also visited Awaso, a town in western Ghana where bauxite has been mined since the 1940s.

“When you look around the town, you would cry,” Okyerewah says. “Their roads were untarred, the roofing sheets were brown in color and the air quality in the area was not good because the whole place was being polluted by the big trucks carrying the bauxite to the port.”

In Malaysia, communities near bauxite mines have experienced this same air pollution as a result of the dust proliferated from their operations.

“[The residents told us that] since the mining started over 75 years ago,” Okyerewah adds, “the only thing they have gotten out of it is a community center and two boreholes. That was all.” She fears this will be the fate of the communities around Atewa in the future.

In many ways, her fears are justified. Awaso is no different from mining towns across Ghana and, indeed, much of Africa. Local communities where billions of dollars worth of gold, diamonds, manganese, and bauxite are mined annually are among the poorest, with residents scraping to survive.

While global mining conglomerates who offer very few low-skilled jobs to locals make massive profits, residents are despondent, trapped in generational poverty and left to face the health effects of pollution on an industrial scale. President Akufo-Addo even acknowledges that resource mining in Ghana has historically not benefited the communities where they are extracted, describing the situation as “nothing short of a disgrace.”

Residents are despondent, trapped in generational poverty and left to face the health effects of pollution on an industrial scale.

It was this imbalance of wealth and relative personal detriment that emboldened citizens in mining villages and towns to take matters into their own hands by engaging in small-scale, illegal mining in the last decade. The resulting ban has allowed for the country to take stock of the scale of the devastation, which the government estimates would cost millions of dollars in order to partially restore.

However, after more than a year in effect, the ban on all small-scale mining activities was repealed in August 2018, opening the door to further environmental destruction on a national level.

With so much evidence on their side, it is difficult for local residents like Okyerewah to believe that bauxite mining would necessarily be beneficial to her community.

Despite campaigners intensifying their resolve to resist, an initial $2 billion agreement with China to build roads in exchange for bauxite passed through the legislature with little opposition. In September 2018, on the sidelines of a forum that brought together over 40 African Presidents and Prime Ministers to Beijing, Ghana officially signed the deal.

While Ghanaian politics are often acrimonious (as is the unfortunate reality in many governments), deals with China have come to a near consensus — a testament to how effective Beijing’s investment strategy with Africa truly is.

The media and the urban middle-class have yet to make their crucial decision on where they stand in this debate. In the absence of critical backlash from those influencers, the government has secured the necessary space to forge ahead with their plans.

For now, campaigners appear to be on the losing side. But for protestors like Okyerewah, the battle will not be over until the first excavators begin to dig. 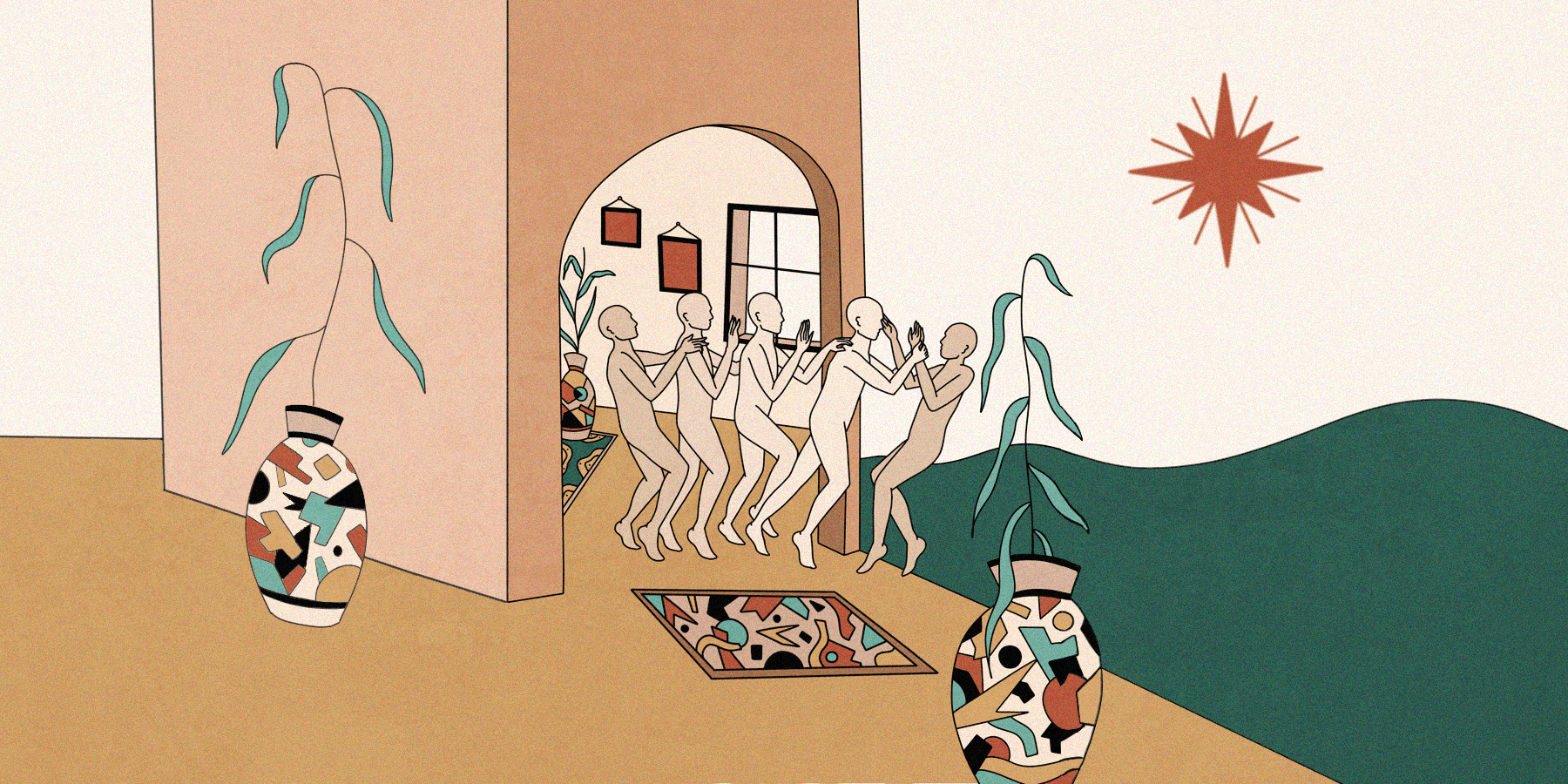 You Are Not Your Startup: A Guide to Self-Identity

You Are Not Your Startup: A Guide to Self-Identity

Kwasi Gyamfi Asiedu is a freelance journalist based in Accra, Ghana. His interests are in social justice, health, environment, and solutions-focused stories. Follow him @journokwasi on Twitter.