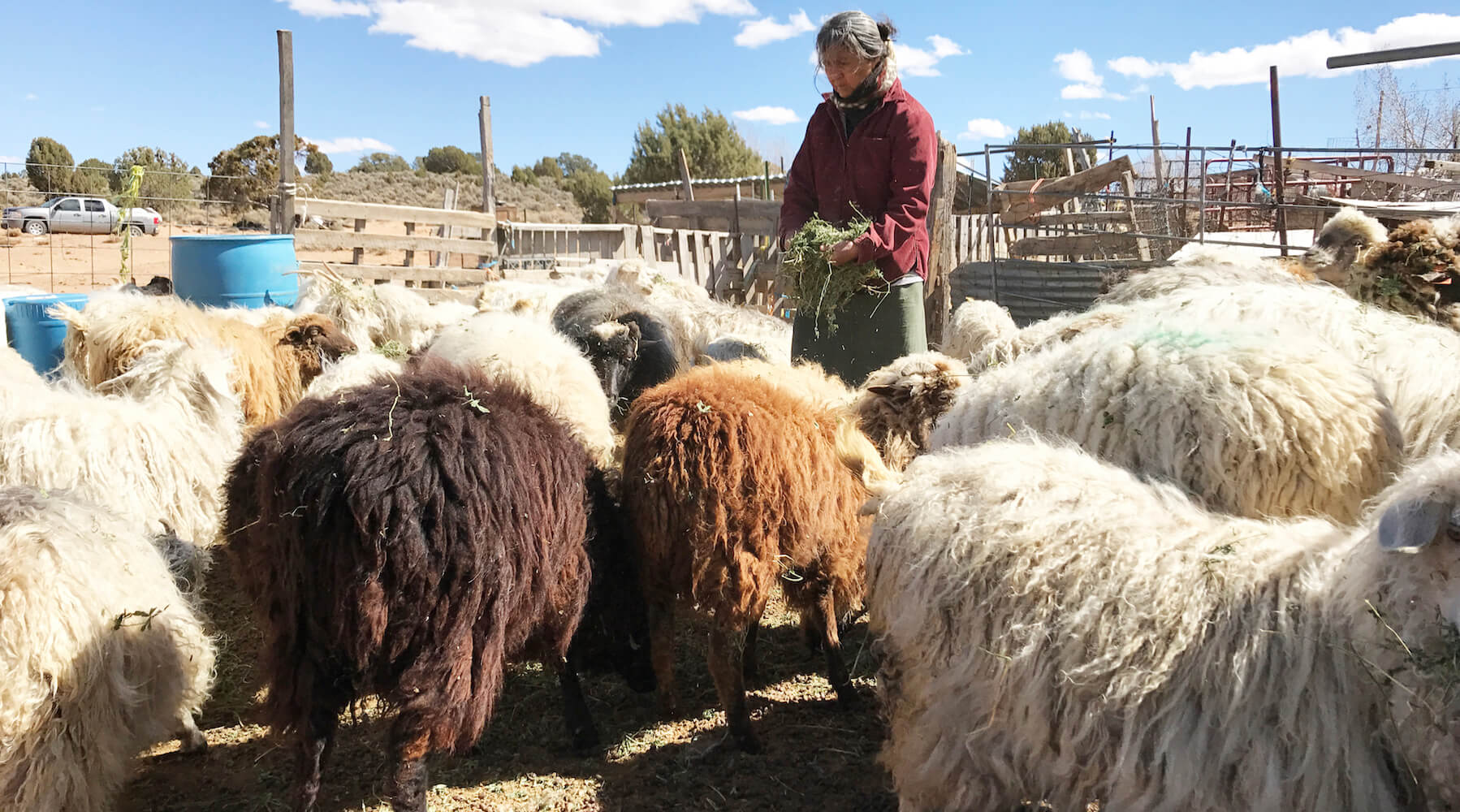 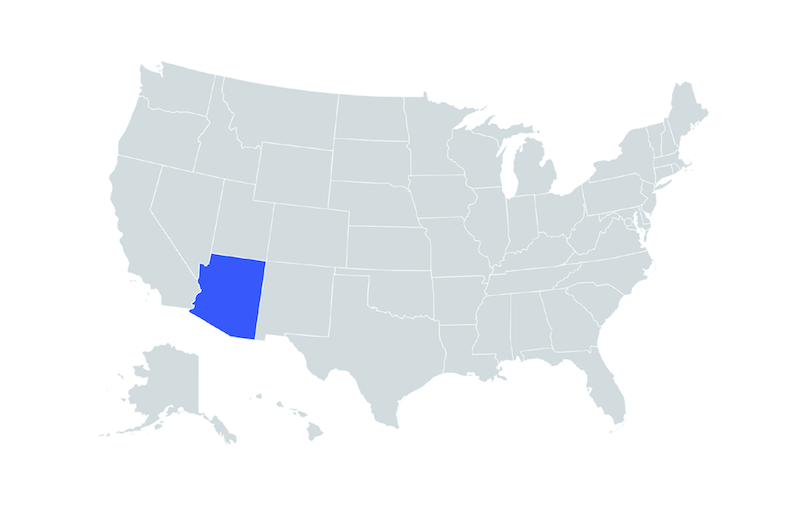 As soon as Lorraine Herder steps into her sheep pen with a stack of hay, her flock of wooly Navajo Churro sheep run over for a morsel of food. It’s another dry day on the parched Black Mesa, the remote area on the Navajo reservation where she grew up and raised her children. A sheep herder since childhood, the 64-year-old says she’s trying to hold onto the livestock-raising tradition that has been passed down from generations of Navajo women.

Herder and her older sister, Edith Simonson, who lives nearby, both grew up raising sheep and used the wool to weave Navajo rugs and blankets.

“The biggest challenge is finding water for our livestock right now. We’re the last few shepherds out here.”

“My mom was a sheep herder all her life, so I’ve been with the sheep ever since I was a little girl, and it means a lot to me,” Herder says. “I wanted to live that life, you know, living off the land.”

However, rising temperatures and shrinking water sources on the Navajo reservation are a major threat to these important Navajo cultural traditions. “The drought makes it difficult for us,” Herder says, and adds. “The biggest challenge is finding water for our livestock right now. We’re the last few shepherds out here.”

Climate change has led to severe drought and heat waves across the Navajo Nation. It’s the largest Native American tribal reservation in the US and spans three states – Arizona, New Mexico and Utah – totaling about the size of Ireland. Herder’s home is located far away from the nearest paved road, in northeastern Arizona. There are no rivers or streams in sight, and it almost never rains.

Scientists studying the impact of global warming on the Navajo Nation are noticing major changes in the environment. “The amount of surface water flowing in streams on the Navajo Nation has declined by about 98 percent over the 20th century,” says Dr. Margaret Redsteer, a scientist at the US Geological Survey in Flagstaff, Arizona.

“The amount of surface water flowing in streams on the Navajo Nation has declined by about 98 percent over the 20th century.”

Redsteer, who also authored a UN Global Assessment report about drought on the Navajo Nation, attributes this to climate change. “I’ve looked at meteorological data over time, and what you see is increasing temperatures and declining precipitation. Those two factors alone lead to increasing aridity and decreasing water availability.”

In a region that only receives six inches of rainfall per year, each degree of temperature increase has an extreme effect on the arid land, Redsteer says. “You add just a little bit of a temperature increase to a place that’s already on the edge, and you’ve made an enormous change in the living conditions there,” she says.

T he effects of climate change have taken a major toll on families who have lived on their ancestral Navajo land for generations. Many residents already live without running water, making the situation even more harsh.

“I remember when I was a little girl, water would seep from the ground, and there would be water running,” Herder says. “We used to take our sheep there to drink water. We used to have a natural spring, but those are gone now.”

That means more work for her Herder and her husband. Twice a week, they load up a 550-gallon water tank onto the back of a borrowed pickup truck, and drive down a bumpy dirt road to a local windmill. They connect a hose to the water tank pumped by a windmill, and patiently wait as their tank fills up.

As he points to the dried-up vegetation in the vast, empty stretches of land outside their home, Dan Herder says: “Nature is out of balance. The land is stressed out and we’re stressed out.”

For younger members of the family, this water-starved environment is a fact of life. They’ve grown up with water rationing.

Lorraine Herder’s 29-year-old grand-niece, Jessica Keetso, walks past a row of water storage containers lined up outside her aunt’s home. As she prepares for a family lunch, Keetso washes her hands with a small cup of water in a plastic basin and describes her hyper-awareness of how water is used.

“We have a water basin,” she says. “It has less than a gallon of water that we use to wash our hands as a family.” At Keetso’s home, her entire family uses only two five-gallon buckets of water for all their cooking and cleaning over two days. 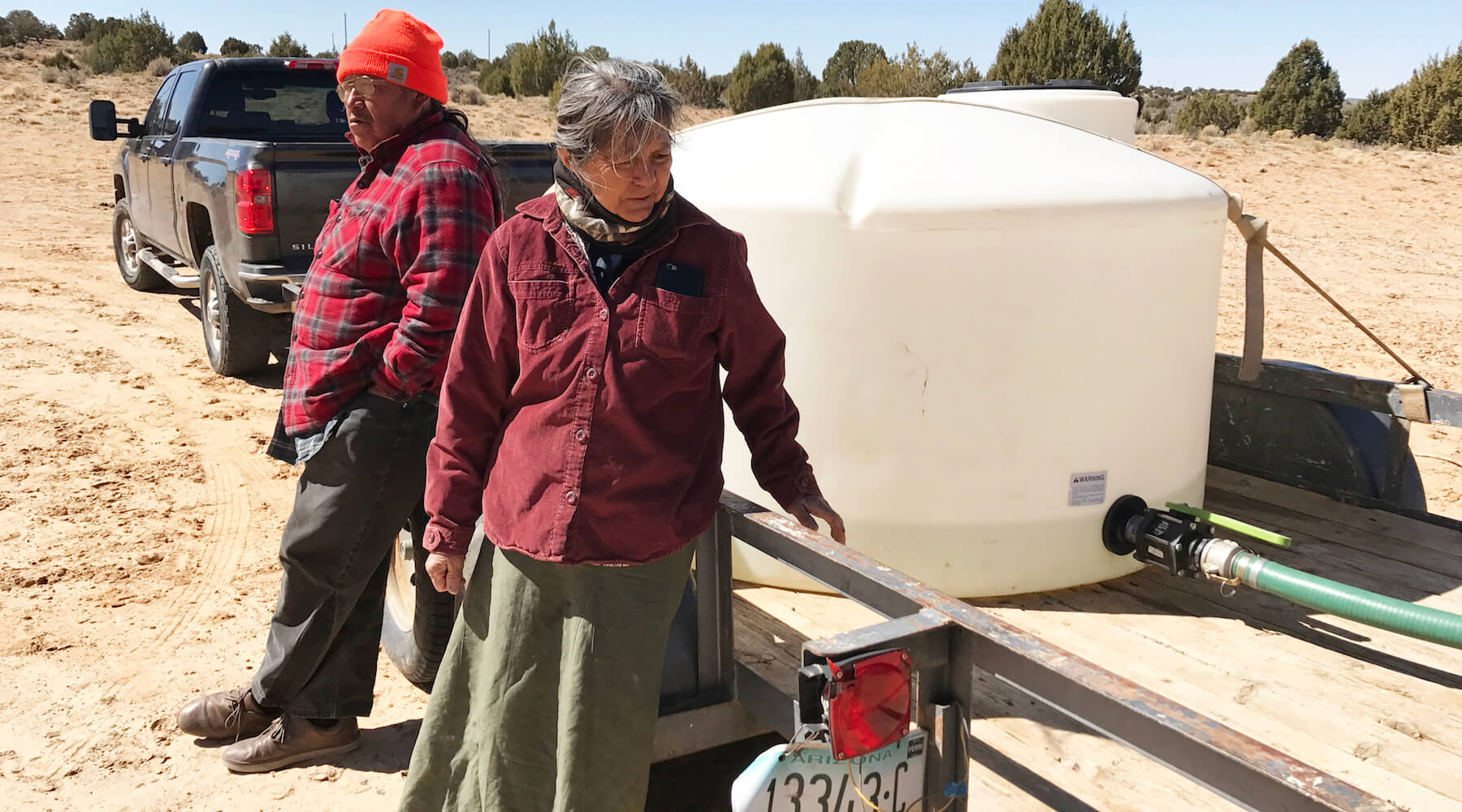 Lorraine Herder and her husband Dan have to haul water in a pick-up truck and often drive long stretches of dirt road to reach open water sources.

'We're in a Water Crisis'

It’s not only climate change that’s drying up the region. For years, local coal-mining operations have supplied a massive power plant on Navajo land. Peabody Energy’s Kayenta mine pumped millions of gallons of water a day from the aquifer located deep within the ground of the Black Mesa, drying up the area’s underground water source.

She worries the lack of water could drive families away from their homeland, which Navajo women have held onto for generations.

Adding climate change to that mix has made things even more extreme. “We’re dry farmers, so we plant our seeds into the ground and rely on the monsoon seasons to bring our corn to harvest,” Horseherder says. “The drought is going to have enormous impacts on the food and water security here.”

Horseherder worries what this means for the future of the Navajo, especially women. “We’re a matrilineal society where our children inherit the clans of their mother and reside at the place where their mother’s home and land is,” Horseherder says. She worries the lack of water could drive families away from their homeland, which Navajo women have held onto for generations.

Scientific research backs this sense of crisis. Dr. Redsteer has also documented quickly-spreading sand dunes, which now blanket one-third of Navajo land. “When you have less moisture for plants to grow, sand dunes can become mobile and blow with the wind,” she says. In some corners of the reservation, expanding sands dunes have even cut off access to the homes of Navajo families. 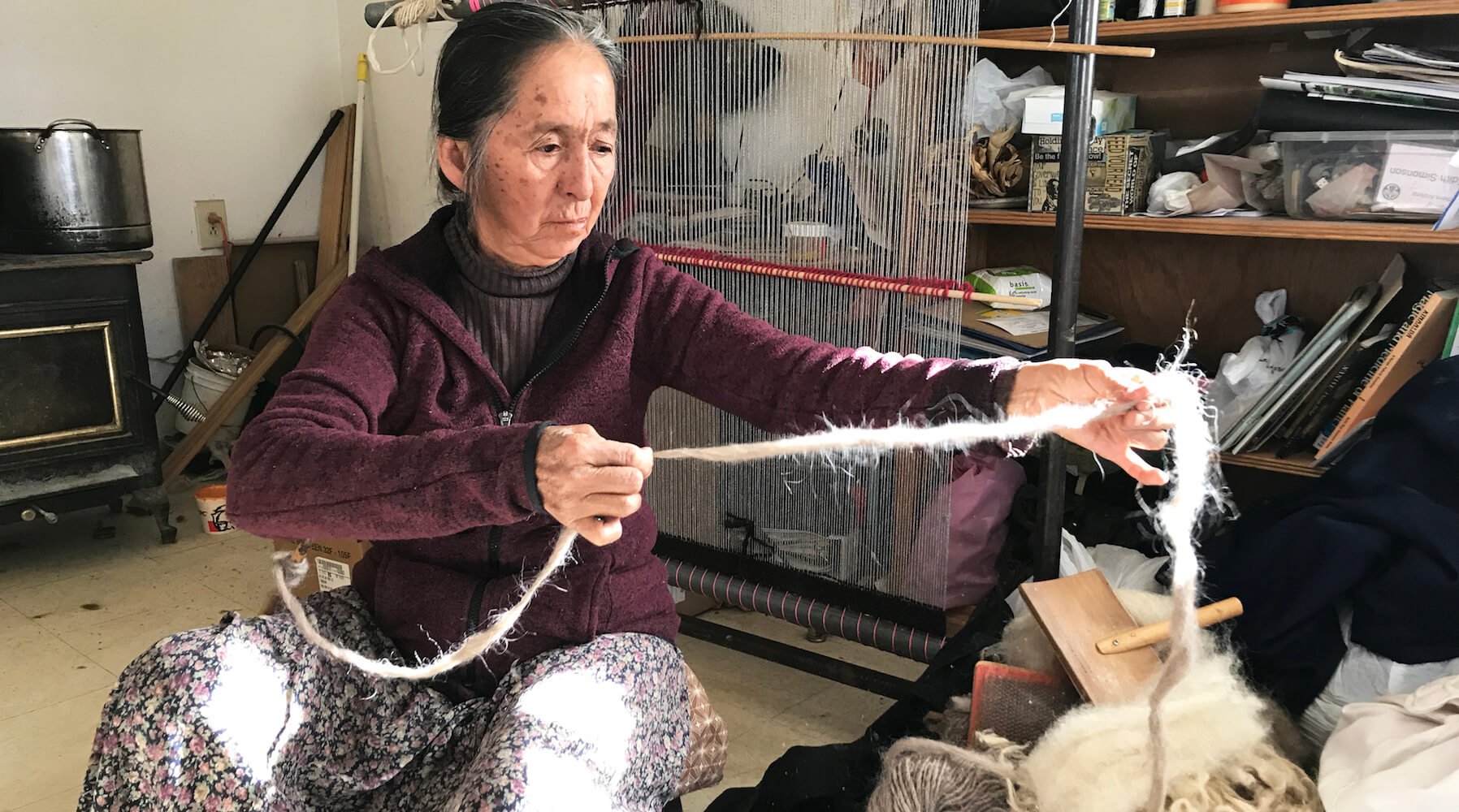 Edith Simonson continues the Navajo tradition of weaving, passed down among generations of women. But, this tradition is disappearing as Navajo land dries up. It’s becoming harder to raise sheep in the drought and heat waves, and many young people have left the reservation.

Herder and her 68-year-old sister, Simonson, depend on their sheep’s wool to carry on the Navajo tradition of weaving.

“I harvest the wool, hand spin, and hand process all the wool and make weavings with it,” Herder says.

“I’m worried about our traditional way of life.”

Simonson continued her craft for decades, even as the land began to dry up. “I learned how to weave when I was with my mother,” Simonson says. “When I was about 8 years old, that was the first time I put up a loom and started weaving.”

After a family lunch, the sisters take a seat and begin looping sheep’s wool around large wooden spools. Simonson unfolds a few of her hand-made rugs to show the intricate Navajo patterns she’s created. “I’m worried about our traditional way of life,” she says, “even preparing traditional food, growing corn and also having livestock, shearing the wool and making rugs.” 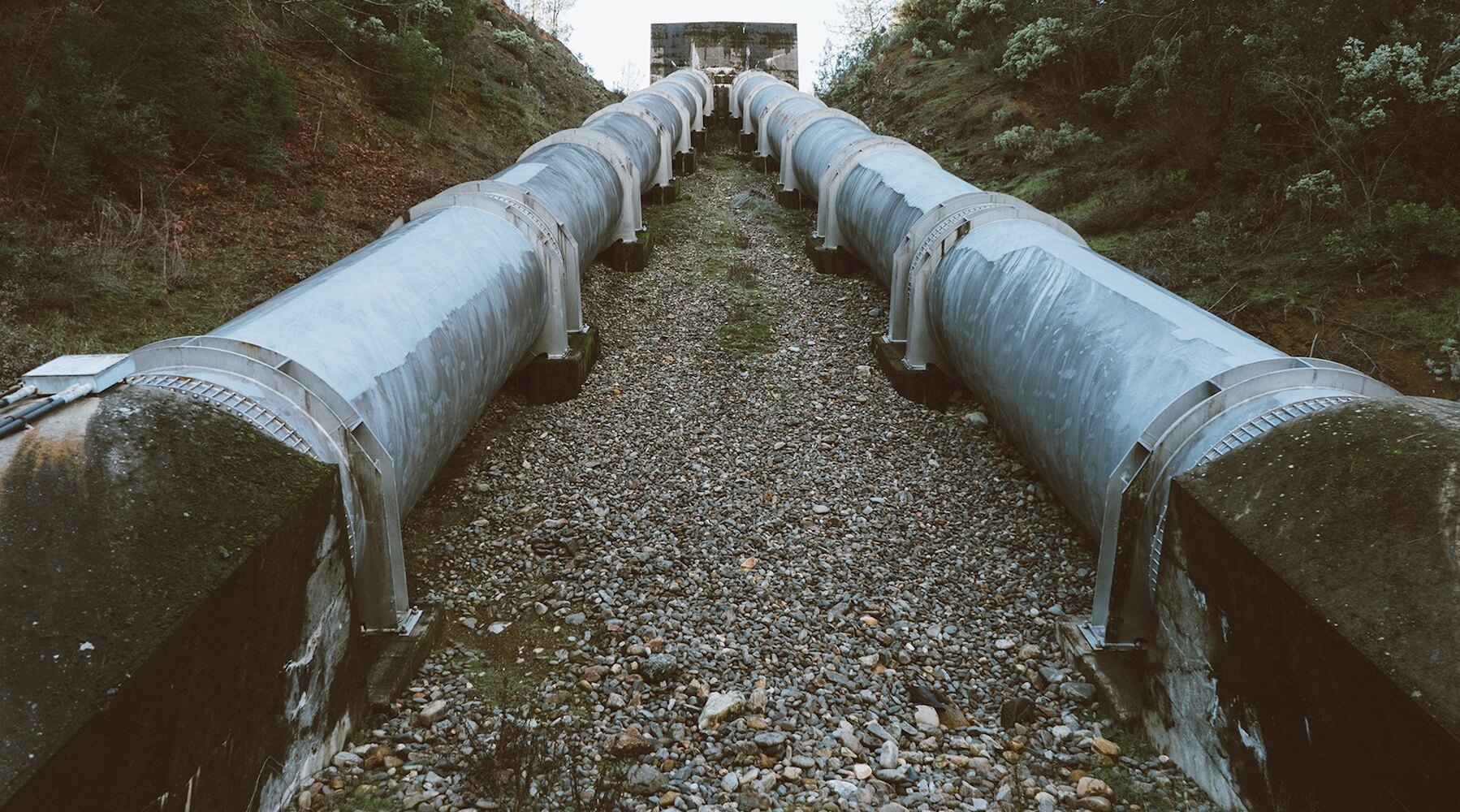 Sonia Narang is a multimedia journalist who reports on climate change and the lives of women and girls around the world. She has produced videos for in-depth multimedia projects at PRI’s The World, as well as reported stories in Japan, India, and the US for platforms such as the New York Times, BBC News, Frontline/World, and PBS NewsHour. She got her start as a journalist at a Colorado newspaper more than a decade ago.