Transforming the U.S. Prison System, One Tablet at a Time

Brian Hill remembers his father coming home in the evenings after teaching community college courses at Folsom State Prison in northern California, and sharing excerpts from essays written by inmates. They grappled with the psychological anguish of wondering how they got to where they were, and why. Even at a young age, Hill recognized the deep-seeded challenges posed by a complicated system — one whose impact is felt by so many yet understood by so few.

Over 2.2 million people are currently incarcerated in the United States. That’s nearly one in 100 adults in prison or jail, a ratio that exploded by 500 percent in the past four decades. The country, which currently holds the world’s largest prison population, spends close to $75 billion on corrections every year to sustain these somber statistics.

Determined to curtail these numbers, Hill pursued his JD and MBA from Northwestern University and began working on social impact bonds and jail population reduction.

Over 2.2 million people are currently incarcerated in the United States. Tweet This Quote

“It didn’t take more than one visit to a jail for me to see 10,000 people locked up watching daytime television,” Hill recalls. “I thought, my gosh, we can do something better with their time.”

Despite studies showing that education decreases recidivism by 43 percent, only one in five inmates receives access, while 60 percent of all prison inmates struggle with illiteracy.

“America needs criminal justice reform,” says Hill. “If I walk away from this issue, I don’t think anyone will do anything about it. I couldn’t choose not to fix this problem. So I dropped out of school, raised money, and made it happen.”

Launched in 2013, Edovo brings tablet technology into jails and prisons to provide daily access to educational, vocational, and therapeutic programming. The company ultimately aims to reduce the rate of recidivism by providing inmates with the skills they need to thrive when they are released.

We will change the corrections system. Until that happens, we’re not going to stop. Tweet This Quote

Edovo leases or sells its tablets directly to its client institutions, often state or county jails and prisons, through a procurement process. Because these facilities often lack technology and also prohibit external communications and internet, Edovo provides all of the hardware, software, and connectivity. Then, similar to Netflix, Edovo stocks the tablets with curated and licensed content from various providers. 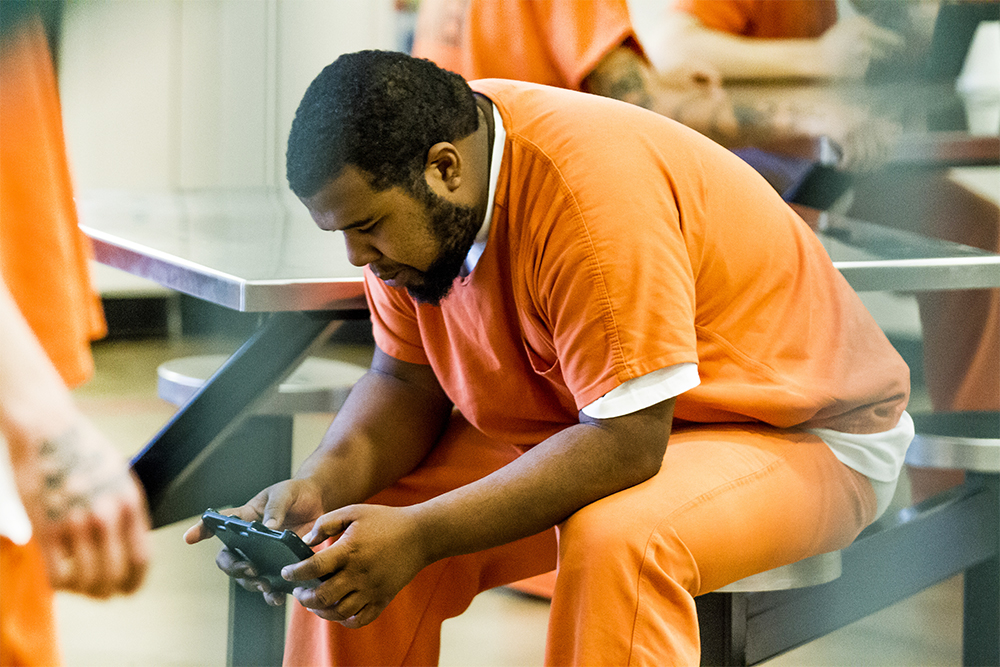 Instead of spending hours watching daytime television, this inmate comletes an educational lesson on an Edovo tablet. Photo courtesy of Edovo

On any given morning, a corrections officer rolls out a cart with the fully charged tablets. An inmate checks out a tablet, logs in using their ID number, and accesses a library of pre-loaded content. They can either pick up where they left off, or choose content from three major sections: Learn & Earn, Exploration, and Play & Spend.

The Learn & Earn section houses GED and college coursework, online vocational videos and vocabulary quizzes, and ESL content. As inmates move through the material, they earn points that enable them to work towards certificates. The Exploration section couples access to documentaries with information about potential careers, allowing inmates to develop new passions and consider what’s possible in their life beyond bars.

Finally, when inmates earn enough points by completing sections of educational coursework, they enter the incentive-based Play & Spend section. Here, they unlock entertainment to simply enjoy, like music and movies.

It’s in our best interest — and in our humanity — to give people as many opportunities as we can before giving up. Tweet This Quote

Institutions that purchase Edovo tablets spend less than 75 cents per inmate, per day. In return, the inmates receive more resources than ever before in the history of corrections. Not only that, but for every dollar spent on correctional education, the state saves up to 5 dollars.

In addition to providing unprecedented access and meaningful savings, Edovo prompts a noticeable cultural transformation in its partner facilities.

“Come to a jail [that uses Edovo], and you can feel the difference instantly,” says Hill. “You know it works from the looks and reactions of the corrections officers. The place goes silent, and incidences of violence drop off. It becomes an environment in which it’s possible to learn and develop.”

Currently, Edovo operates in over 15 states across the country and launches at least one new site each week. Through real-time tracking, Hill and his team monitor over 10,000 users around the country who have logged approximately 85,000 hours of study on Edovo’s tablets. The platform boasts a retention rate of over 80 percent, with three-quarters of users interacting on a weekly basis.

“We [at Edovo] believe in second, third, and fourth chances. It’s in our best interest — and in our humanity — to give people as many opportunities as we can before giving up. We will change the corrections system. Until that happens, we’re not going to stop.”

The entrepreneur featured in this story participated in Project Literacy Lab, a new initiative co-founded by Pearson and Unreasonable Group to wrap resources around the fastest growing ventures worldwide positioned to solve key challenges tied to illiteracy.